Sortition to the Rescue! 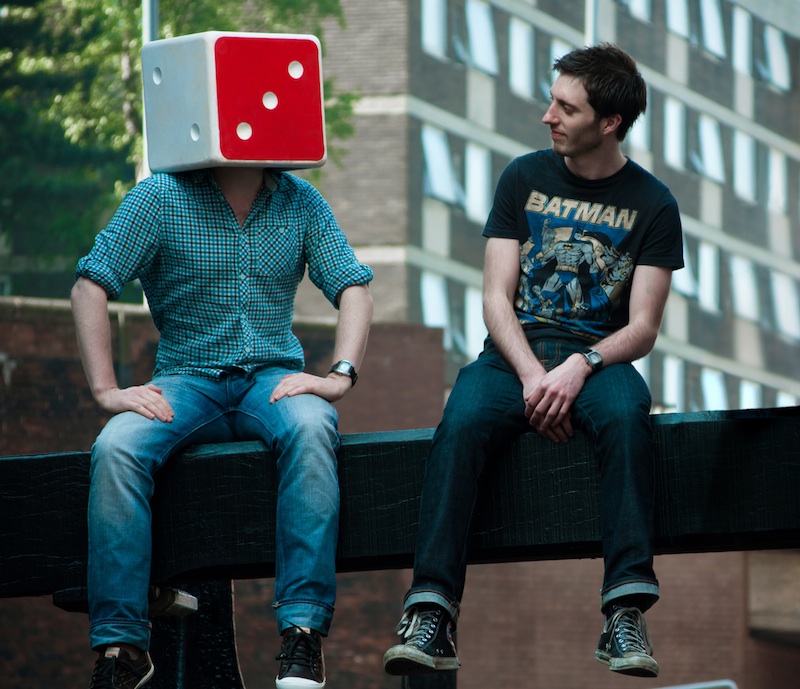 If sortition were a superhero we think the superhero would look something like this...

BUT, if you want to become a sortition superhero then here is your chance: join our Discourse discussion forum which is for anyone interested in discussing citizens' assemblies and citizens' juries and to share experiences and knowledge - you could even discuss sortition superhero costumes if you'd like...

Or, if you'd prefer to listen and talk about sortition here are a few options:

If you are at any of those events don't hesitate to come and say hello!

The next democratic (sortition) revolution has begun!

The democratic revolution that we exist to support and encourage has begun, with TWO permanent sortition "chambers" being passed into law in the past few months.

Also in this jam-packed, exciting update from the Sortition Foundation:

But first read all about the sparks of the coming democratic revolution...

Want to know how to fix our broken democracy? Here's the Sortition Foundation strategy - from electoral dystopia to new democratic dawn in three easy steps! Ok, maybe it's not that simple - but it is a plan! Visit our membership page to become a Sortition Foundation member.
By Brett Hennig
February 13, 2019
Share

From Wednesday January 16 to Friday January 18 the international network, Democracy R&D, whose first principle is the use of "sortition (random selection) to assemble representative groups of everyday people", will be meeting for the second time, this year in Paris.

Three directors of the Sortition Foundation will be attending, along with members of around 21 organisations and several "guest participants". This year sees the network growing, with the inclusion of Involve, DemSoc, the RSA, DeliberaBrasil and Génération Nomination, alongside many of the participants from last year's meeting in Madrid.

The meeting will also discuss the “Great National Debate” in France — a series of regional sortition assemblies — in response to the Gilet Jaunes protests.

It will also be very interesting to hear from the participants from Madrid, who were instrumental in that city becoming the first in modern Europe (and possibly the world?) to institute a sortition body (called "The Observatory") alongside an elected assembly. The Observatory (which has 57 members, the same number as the elected city council), will have significant power to allocate funds to popular projects taken from Madrid's online citizen proposal platform.

Sortition is finally moving in from the fringes, and the Sortition Foundation is excited to be a key participant in the Democracy R&D network, which is an integral part of that movement.

Check out our latest publication: 10 reasons to run a sortition citizens' assembly, which our friends and supporters have also translated into (Brazilian) Portuguese, Italian, Spanish, French, and Hungarian. Enjoy! 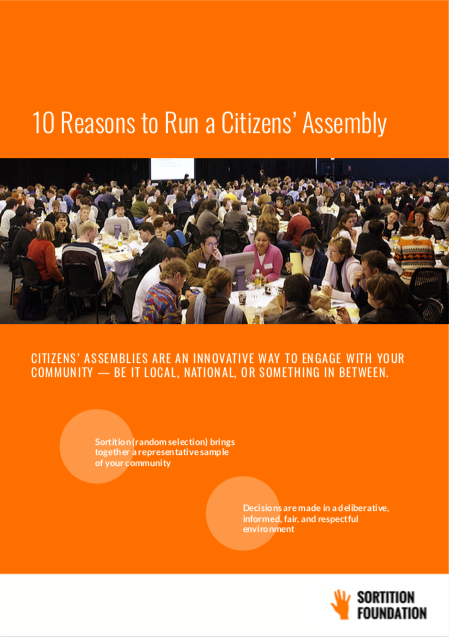 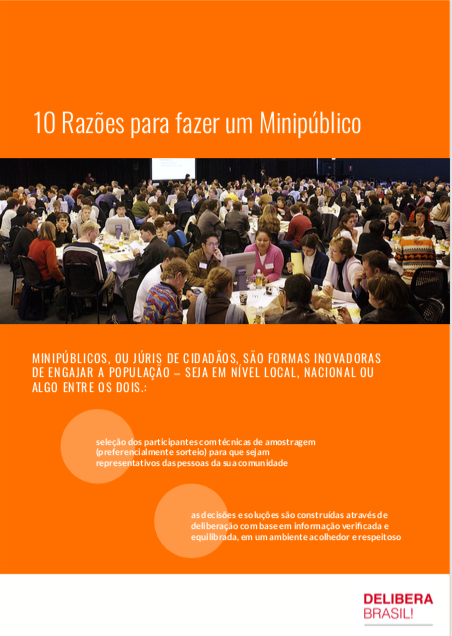 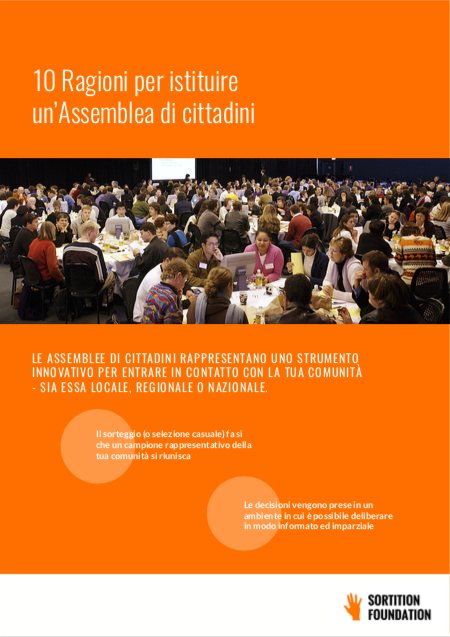 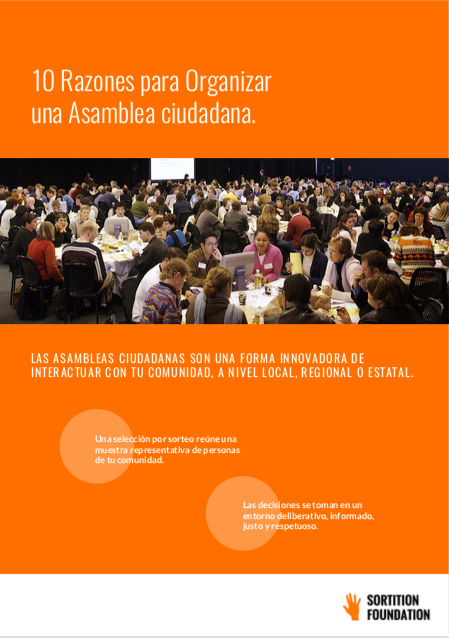 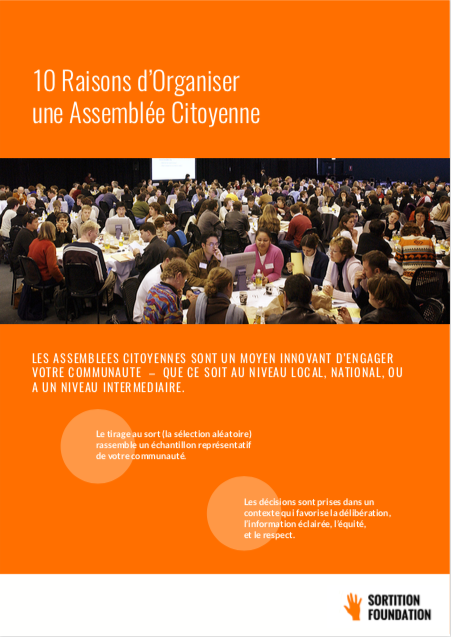 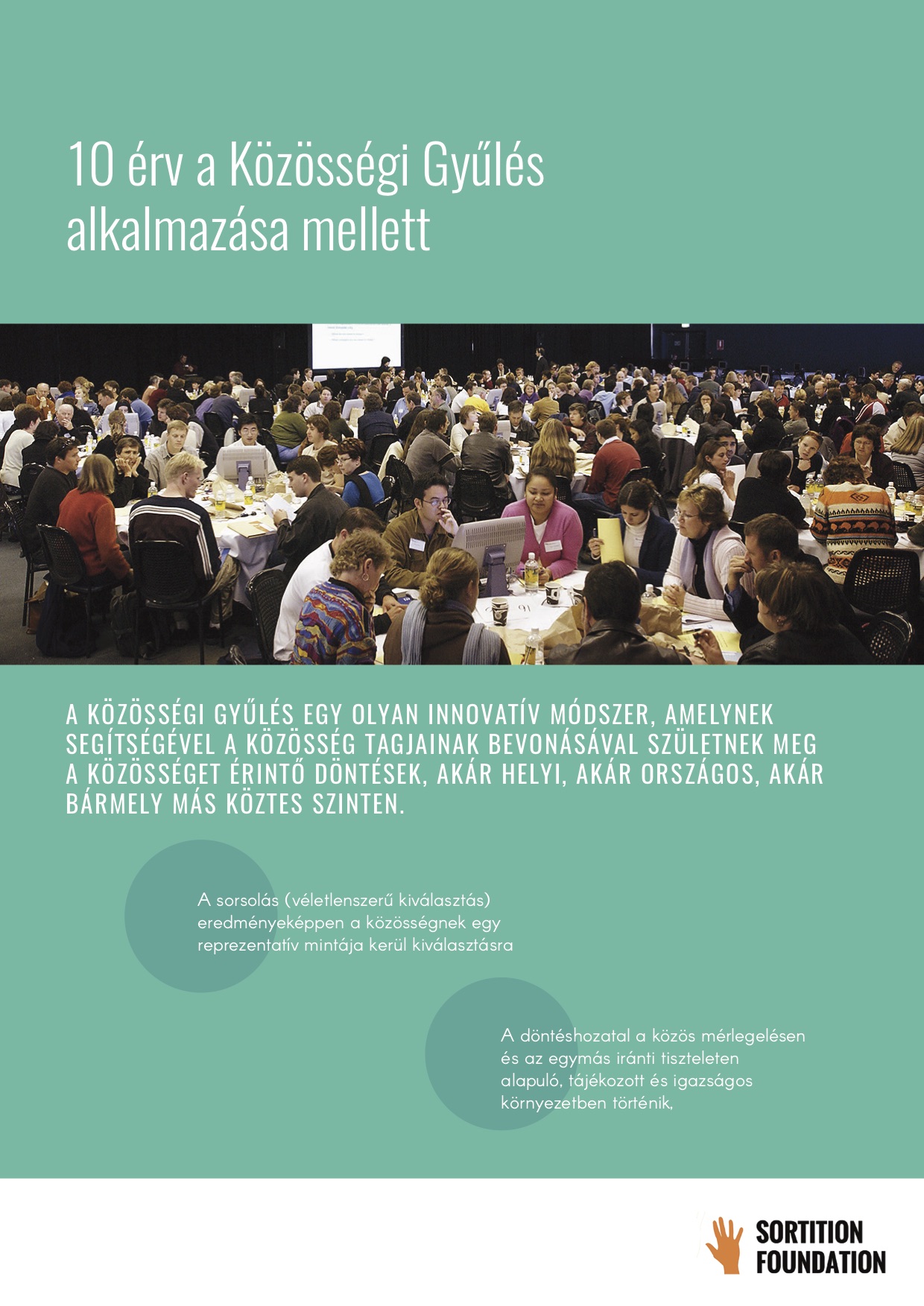 What would a randomly selected US Senate look like?

If you selected 100 people randomly from the US population and put them in the Senate, what would the age and demographics be like? 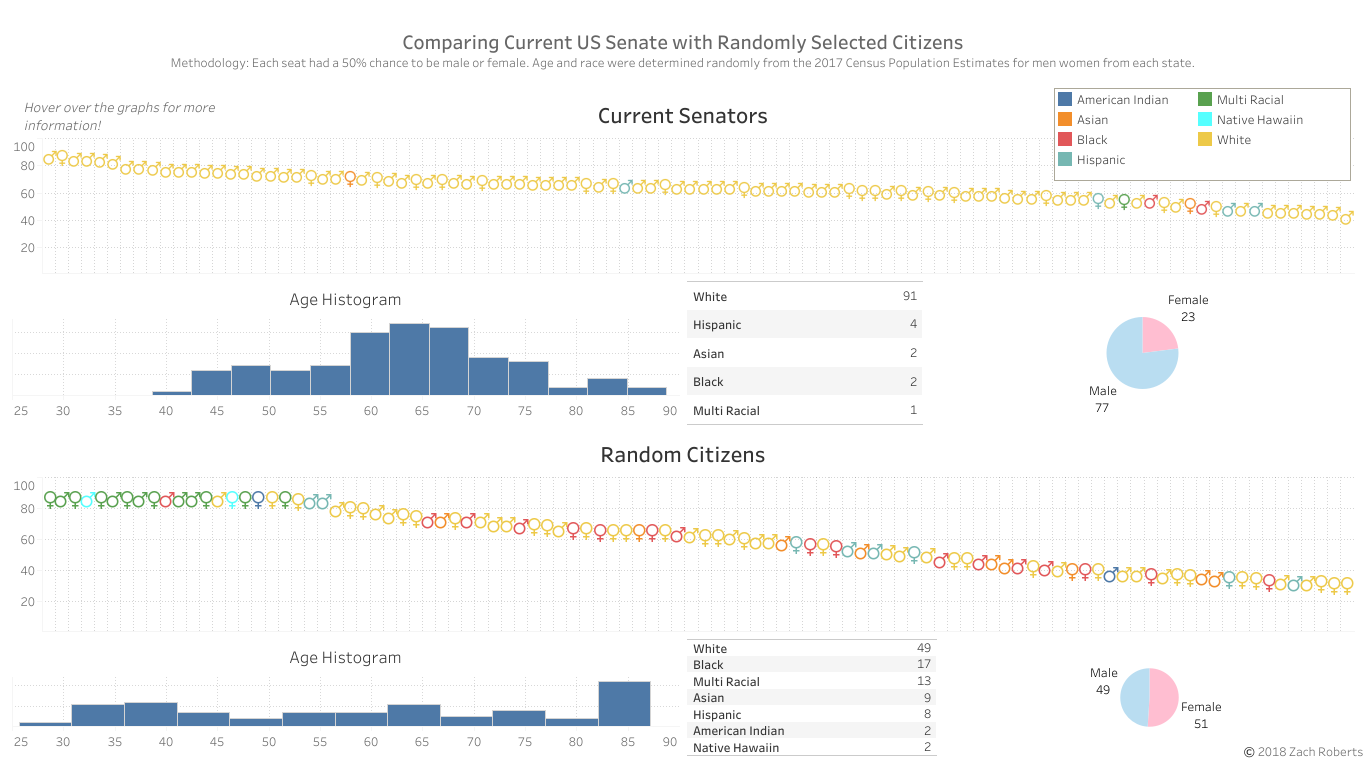 Zach Roberts created this great graphic answering exactly that question. Perhaps the most obvious is it would have many more women, and of course far more young people. It would also, unsurprisingly, be a far more ethnically diverse Senate.

But, of course, the point of sortition is not only to make our legislatures far more inclusive, diverse, and representative — but to see what kind of impact this inclusivity and diversity has on the political process and the legislation that such a Senate passed.

What kind of laws do you think a sortition Senate of everyday people would pass? 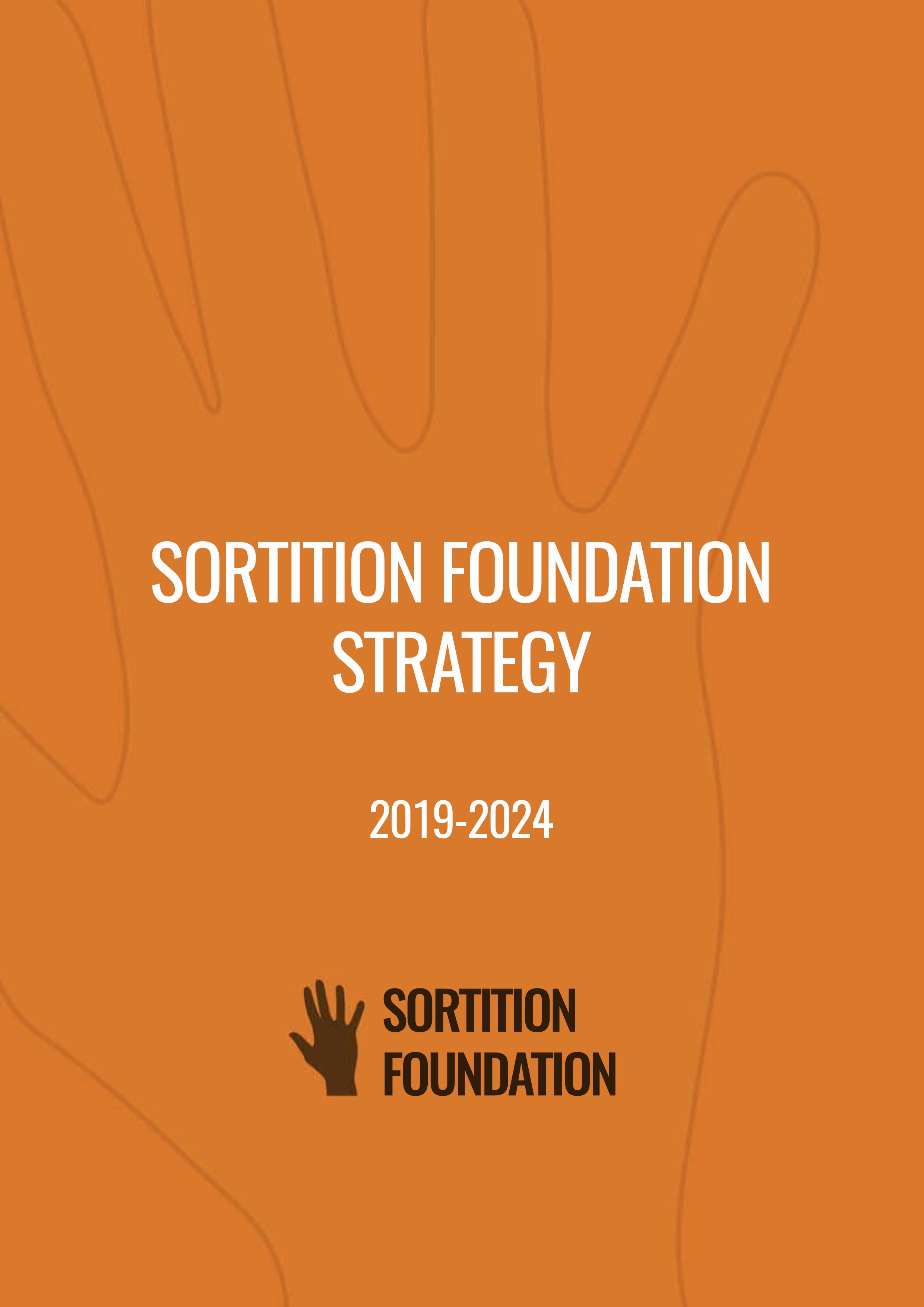 How should we do democracy better? How can we institute a sortition democracy? How do we get from here to there?

After a lengthy process of member and supporter consultation, we are proud to publish our Strategy Document 2019-2024. This was endorsed by the directors in October 2018 and implementation has already began — although it is never too late to make comments and give feedback as we will be reviewing it regularly.

As soon as word got out about our new Sortition Ambassador Programme we had volunteers asking to be our first candidates. So, if you want to:

Then simply get in touch. The programme typically involves 1-2 hours of your time every week, and should normally be completed in less than 6 months.

We have a plan on how to get to a sortition democracy - now it's time to implement it!

How to get from elections to sortition? Sortition Foundation strategy workshop

On Sunday June 10, 2-5pm (British Summer Time/GMT + 1) the Sortition Foundation will be discussing strategy: what is the best way to get from elections to sortition?

There will be two face-to-face meetings, one in London and one in Cambridge, with people not in either of those locations joining us online.

If you would like to join us, it is not too late to RSVP, just drop us an email and we will send you links to the agenda, our strategy discussion paper, and all the meeting details.

Strategy Discussion: How to get from elections to sortition?

Where: London, Cambridge, and online.

We look forward to talking with you about what you think is the best way forward.

[Disclaimer: the Sortition Foundation is non-partisan and does not endorse any political parties. This is published as an interesting experiment in the use of sortition in politics] 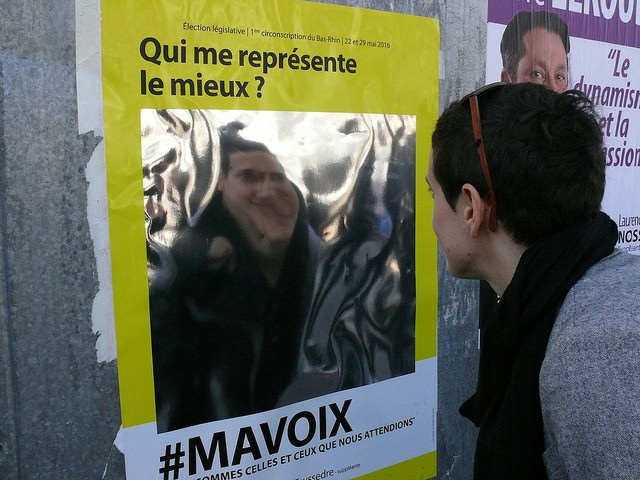 A group of friends began the collective #MAVOIX (meaning "my voice") in France in 2015 - they all believed that the current form of our representative democracy has failed us.

The idea was to bring together diverse citizens from different backgrounds to collaborate, discuss and work out how to "hack" the Assemblée Nationale by allowing everyday citizens to participate in the creation of every single law. After a first run at a local election in 2016, the goal was set to send several deputies (Members of Parliament) to Parliament after the June 2017 election.
Once elected, these deputies would play a very special role. Instead of voting according to their own program or convictions, they would always vote according to the outcome of every citizen who had voted on an online platform: if, for example, 10 #MAVOIX deputies were in the Assembly, and the result from the online platform about a law was 40% YES, 30% NO and 30% ABSTENTION, then the #MAVOIX deputies would vote in the same proportions (in this case: 4 YES, 3 NO, 3 ABSTENTIONS).
Read more
By Brett Hennig
May 30, 2018
Share

Beating the Cambridge Analyticas: change the way we (s)elect our representatives

As Aristotle put it: ‘It is accepted as democratic when public offices are allocated by lot, and as oligarchic when they are filled by election’ (Aristotle, Politics IV. 9, 1294b8).

We are now all aware of how our electoral systems have been manipulated by harvesting our digital footprints and preferences. Targeted messages, images and false information are then deployed to support or denigrate particular candidates, with no verification and no disclosure of the source of the posts.

Whatever it’s called legally, this is electoral fraud and we need to stop it. Here’s my suggestion – let’s adopt sortition (selection by lot) together with what I will call ‘filtration’ as our preferred electoral system.

It's time for a UK citizens' constitutional convention 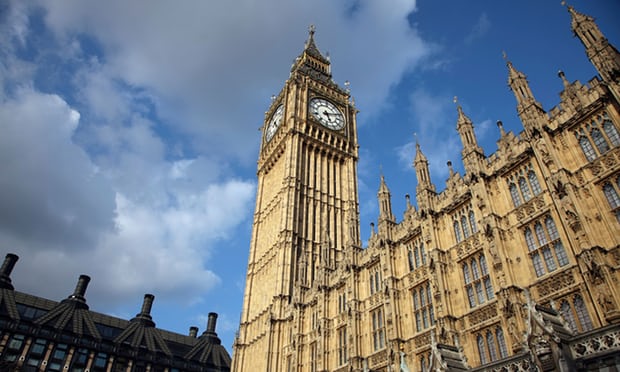 The Sortition Foundation has recently joined an alliance of groups calling for a citizens' constitutional convention in the UK.

It all started back in the summer of 2014 when a group of people, concerned about the state of democracy in the UK, created Assemblies For Democracy. Their aim is to highlight the glaring democratic deficit in the UK and propose solutions. They organised meetings, networked with like-minded people, groups and politicians and, in July 2016, published a letter in the Guardian, Time for a new UK citizens’ constitution.

On Tuesday 16th and Wednesday 17th of January 2018 around 40 people from more than 15 organisations will meet, many in person at Medialab Prado in Madrid (others will join online), to develop the founding principles and processes of an international sortition network: Democracy R&D.

The two day meeting promises to lay the groundwork for international collaboration and skill-sharing to promote and institute sortition locally, nationally, and even internationally. Watch this space for a post-meeting report.