Sortition: the idea, the meeting, and a strategy 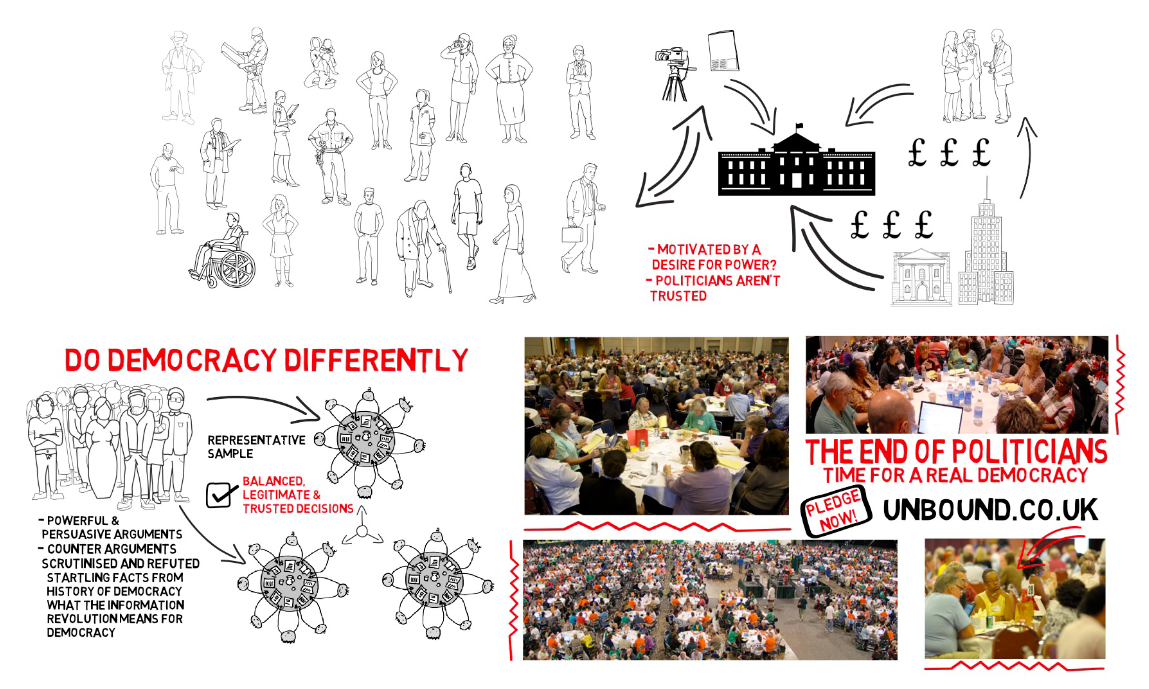 The End of Politicians by Brett Hennig

The End of Politicians, a well-researched book that clearly and succinctly argues the case for sortition, is being crowd-funded by the publisher Unbound: https://unbound.co.uk/books/the-end-of-politicians

You can help make this book a reality!

If enough pre-sale pledges are received then Unbound will hand the book over to its editorial, design and marketing team, and it will be published and then distributed by Penguin/Random House.

Here's what reviewers have said about it:

Darn! This is the book I wish I had written. Compelling, inspiring, evidence-based. Hennig explains how democracy got us into this mess, and how we can fix it.

– Professor Lyn Carson, The University of Sydney, Director of the newDemocracy Foundation

Do you believe holding elections every couple of years means you live in a democracy? Short, powerfully argued and carefully researched, Hennig shows how elections have for a long time been known to serve the interests of the powerful – and how ordinary citizens can regain control of their government.

Hennig takes stock of democracy in the past and present. His bold assessment will enable us to step out of the shadows of the political elite. Hennig does not stop there, however. In a fast-forward to the future, he outlines ways and systems that will make the dream of democracy come true. This book is an energy drink for social action.

The End of Politicians provides a powerful critique of the democratic deficits inherent in all forms of electoral democracy. But it does much more than explore the undemocratic qualities of electoral democracy; it proposes a compelling and provocative alternative – the random selection of ordinary citizens to serve as fully empowered legislators. Whether one agrees with this or not, the clarity of the argument will generate productive debate.

If you would like to see this book published and, perhaps, for us to take one small step towards a better democracy, please pledge now:

The First Annual General Meeting of the Sortition Foundation

Where and when: 6pm on Wednesday April 6th in central London (venue TBC).

Come along and hear what we've been doing for the last year, what our plans are for the coming year, and how you can get involved. All welcome but please RSVP through http://www.sortitionfoundation.org/contact

Where and when: 1-4pm on Wednesday April 6th in central London (venue TBC).

The campaign for a Citizens' Parliament on House of Lords Reform (http://www.citizensparliament.uk/) will officially be launched later this year and will call on the UK government to constitute and empower a 650-member, random though representative sample of ordinary citizens to consider, research, deliberate on, and then make a House of Lords Reform proposal, to then be put to a national referendum. Please come along if you want to help develop the strategy for this campaign. RSVP essential through: http://www.citizensparliament.uk/contact