On 8 April 2022 we transferred the details of 25 residents of Birmingham to the organisers of the Citizens’ Panel on getting to net zero in the home. These 25 people will meet online in April and May 2022 over 7 separate days to consider the question

What needs to happen to bring home energy use in line with the need to tackle climate change?

The Panel is part of a research study being conducted by Lancaster University and the Climate Change Committee (the UK Government’s statutory advisor on carbon emission targets). The panel was convened to find out people’s priorities and concern around home energy and climate change. These findings will be used by the Climate Change Committee to help inform the advice they give to government.

Sortition Foundation was tasked with recruiting these 25 panel members. We worked with Shared Future to achieve this. Below we briefly describe the details of this recruitment process; the process followed our standard two-stage sortition template in conformity with the OECD's good practice principles for deliberative processes for public decision making.

We randomly selected 10,000 addresses from across Birmingham (400 addresses for every one of the needed 25 panel members). Each of these addresses received a letter in the post inviting residents to sign up as potential members of the climate assembly. This job was a little bit unusual in that the researchers at Lancaster University needed to hear from home owners -- people had to own their own home in order to be eligible to sign up to participate. Since this is a significant constraint we sent out a much larger number of letters than we would normally. 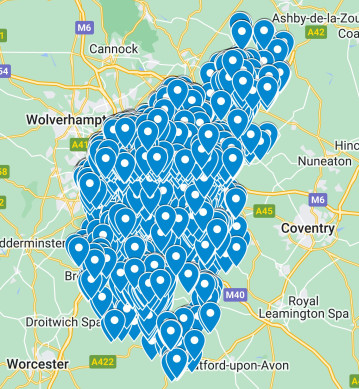 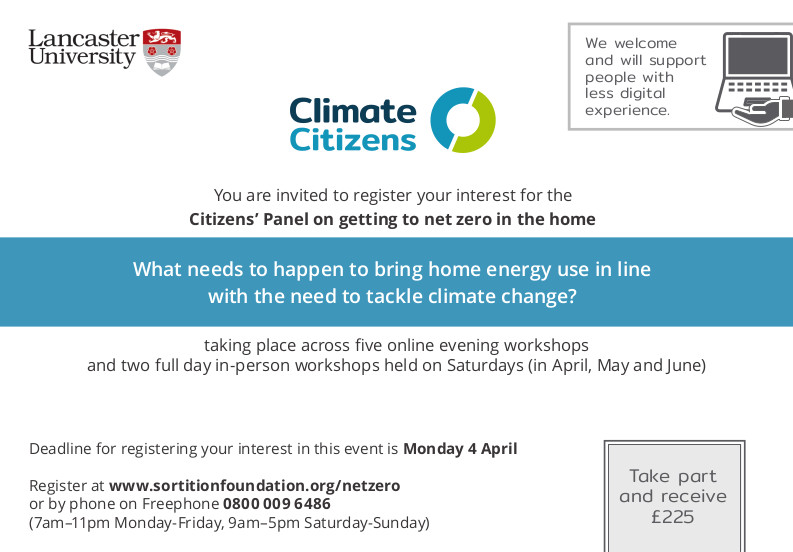 All participants in the climate assembly received £225 in recognition of the considerable time and energy that the process required of them. Invitations were open for 2 weeks and at the end of this time 55 people had signed up as potential panel members.

As part of the sign-up procedure, all potential participants were required to share some basic information about themselves. We asked them to share their address, their date of birth, their gender, their housing type and their ethnicity. We  asked if they describe themselves as having a disability and we asked "How concerned, if at all, are you about climate change, sometimes referred to as 'global warming'?" This question was asked to ensure that there was a wide range of starting opinions about the specific subject that the assembly was tasked to consider.

We then used this information as input into a "sortition algorithm"; this is a process of randomly selecting our 25 panel members from the pool of 55 potential members in such a way that we have a representative sample (so, for instance, the age profile of jury members is broadly similar to the age profile of the UK population as a whole). The algorithm that we used is the fairest possible.

In addition to the information about gender, age, ethnicity, housing type, disability and attitude to climate change mentioned above, we did a couple of extra things: 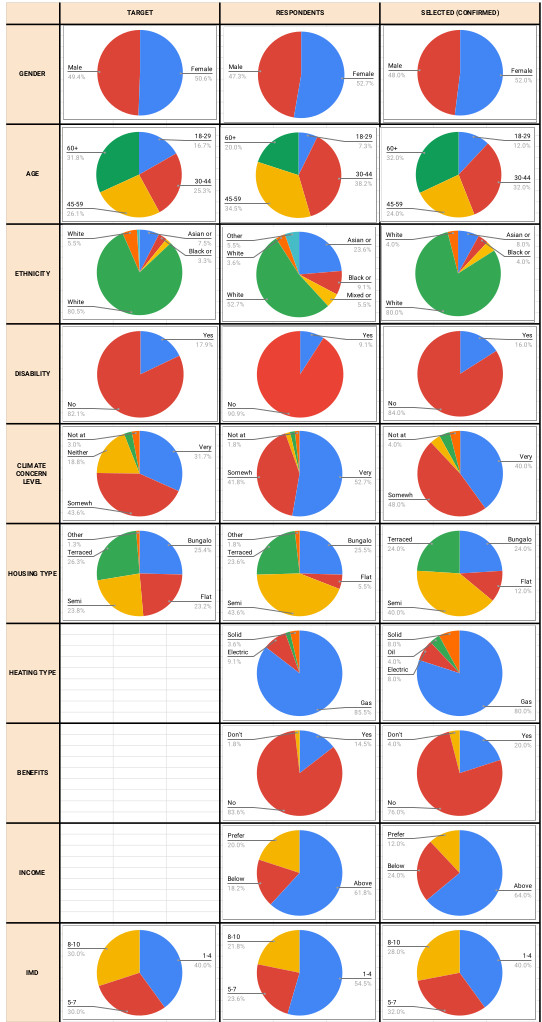 This particular job was a challenging one thanks, in large part, to the fact that only home owners were eligible to participate. One consequence was, for instance, that less young people (18-29) signed up than we were hoping -- presumably because a lower percentage of people in this age bracket own their own home. As a consequence there was slightly lower representation for this group than was our target for the UK.

Similarly, it would appear that for the catchment area we used (Birmingham) there are relatively less occupier-owned flats as compared to the whole of the UK. Again this meant that this group was slightly under-represented in the overall panel.

Despite these small aberrations, the pie charts do demonstrate that the 25 people selected for the panel represent a broad range of experience. It is this range of experience that will be so valuable to the researchers at Lancaster University. We will update this page when outcomes from the panel are made public.