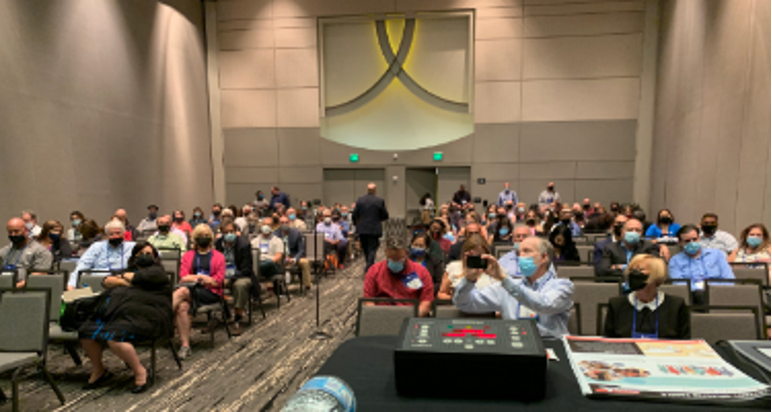 On September 23 of last year (2021) Linn Davis (Healthy Democracy) and Wayne Liebman traveled to Sacramento for the California League of Cities Conference, an annual gathering of mayors and city council members from across the state. We presented a workshop on Lottery Selected Panels as an out of the box technique to approach difficult municipal decisions. About 200 municipal government personnel attended the presentation. A League publication promoted the workshop this way:

“Many elected officials are seeking completely different approaches to decision-making as they want to pivot away from the 'way we have always done things'. One novel idea that is gaining momentum is called policy juries or sortition, where randomly selected representative members of the community are empaneled to learn about a topic, hear expert testimony, consider public comment, and make a decision. While the members of the policy jury are selected randomly, there is a process to ensure the jury reflects the demographics of the community, meaning the juries can truly be a microcosm of their city.”

After presenting the “why” and “how” of democratic panels, Linn and I were joined by Culver City Mayor Alex Fisch, Petaluma Councilman Dennis Pocekay, and city attorney Christi Hogin. Christi moderated a conversation, asking Mayor Fisch and Councilman Pocekay what dilemmas in their cities they’d consider lottery selected panels for, and what problems they anticipated. The entire group then fielded audience questions.

For some months, Leonora Camner and I have been advocating for democratic panels with city officials in California through our non-profit, Public Access Democracy (formerly Random Access Democracy). The panels have relevance to a range of problems: housing, redistricting, police oversight, etc. The workshop is one result of our advocacy efforts.

Update from March 2022: Petaluma Council has just unanimously approved their first citizens' assembly on the topic of what to do with their fairgrounds in the centre of town!