Newham Council have established a standing citizens' assembly to discuss issues important to the people of Newham and to allow for participatory democracy to be built in to council processes. So far they have run two events, the first in July 2021 and the second in January and February 2022. They are currently gearing up for the third event which will be happening in September 2022.

This report is for the first of these events which was held in July 2021. The assembly's first subject was "Greening the Borough" and asked the question: "How can we make Newham a place where people lead healthier and happier lives?"

Sortition Foundation was tasked with recruiting 50 assembly members. Below we briefly describe the details of this recruitment process; the process followed our standard two-stage sortition template in conformity with the OECD's good practice principles for deliberative processes for public decision making. 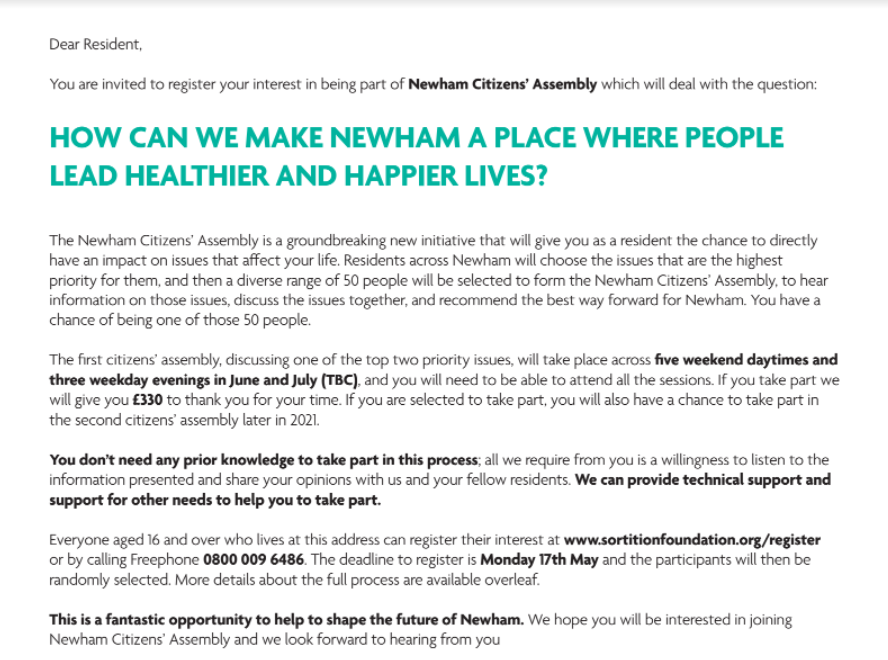 As you can see, all participants received £330 as a way of acknowledging the considerable time and energy they are giving to the event. Paying people to take part in these events is really important as it opens up the event to people who may otherwise not be able to to afford to give up their time. Childcare, tech support and other accessibility support is also offered so that there are no barriers to taking part.

Registrations remained open for 6 weeks and we had 461 people sign up to participate in the assembly.

As part of the sign-up procedure, all potential participants were required to share some basic information about themselves. We asked them to share their address, their date of birth, their gender, their ethnicity, whether or not they saw themselves as having a disability and their occupation.

We also used the addresses that people gave us to create geographical categories which represented the different neighbourhoods within Newham so that the group would be representative across the borough.

We then used this information as input into a "sortition algorithm"; this is a process of randomly selecting our 50 participants from the pool of 461 people who registered an interest in such a way that we have a representative sample (so, for instance, the age profile of participants is broadly similar to the age profile of the population as a whole). The algorithm that we use is the fairest possible.

As an example, details of the selection process for the Newham Citizens' Assembly are summarised using the following pie charts, with further information following. 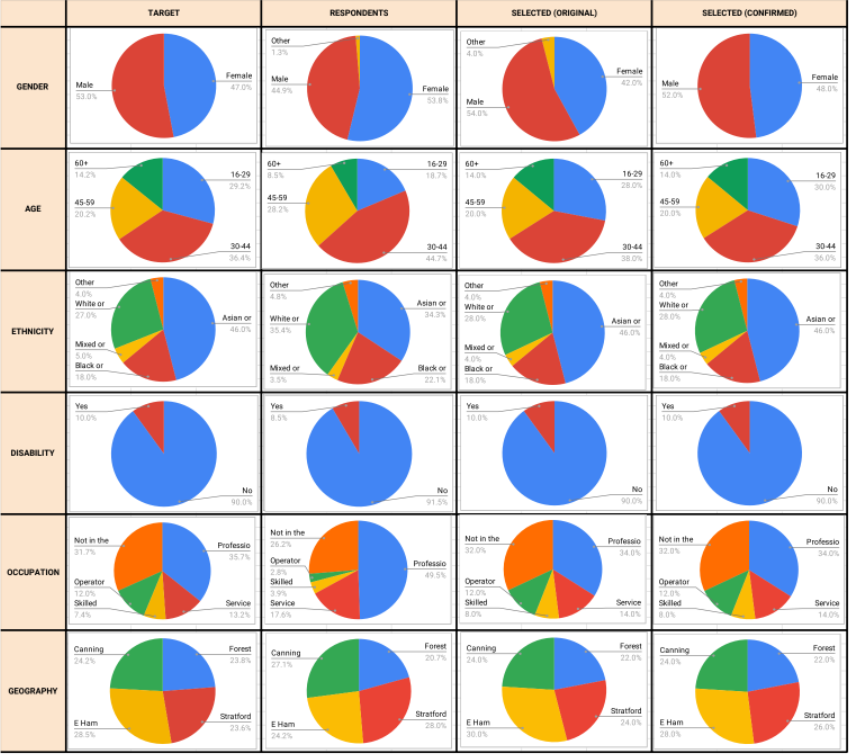 A note about the gender pie charts is important: you will see that 4% of respondents had a gender identity other than "male" or "female". Since there are no good population statistics available for people who identify in this way in the UK, our target pie chart only has values for "male" and "female". To ensure that this 4% of respondents were treated fairly we randomly assigned a gender "male" or "female" to these respondents before entering them into the algorithm. This ensured that they had equal chance of being selected. On this occasion, our random selection did not result in any of these 4% being selected hence, as you can see, the selected jury members all identified as male or female. We very much regard this method of operating as a stop-gap measure -- our hope is that after the results of the 2021 UK census have been released, then we will have good access to statistics about how UK residents identify their gender and we can use this information directly in our random selection.

These 50 people went on to make up the participants for first event in Newham's Citizen's Assembly. Newham council have begun working on the reccommendations they put forward, and have also successfully completed their second assembly.