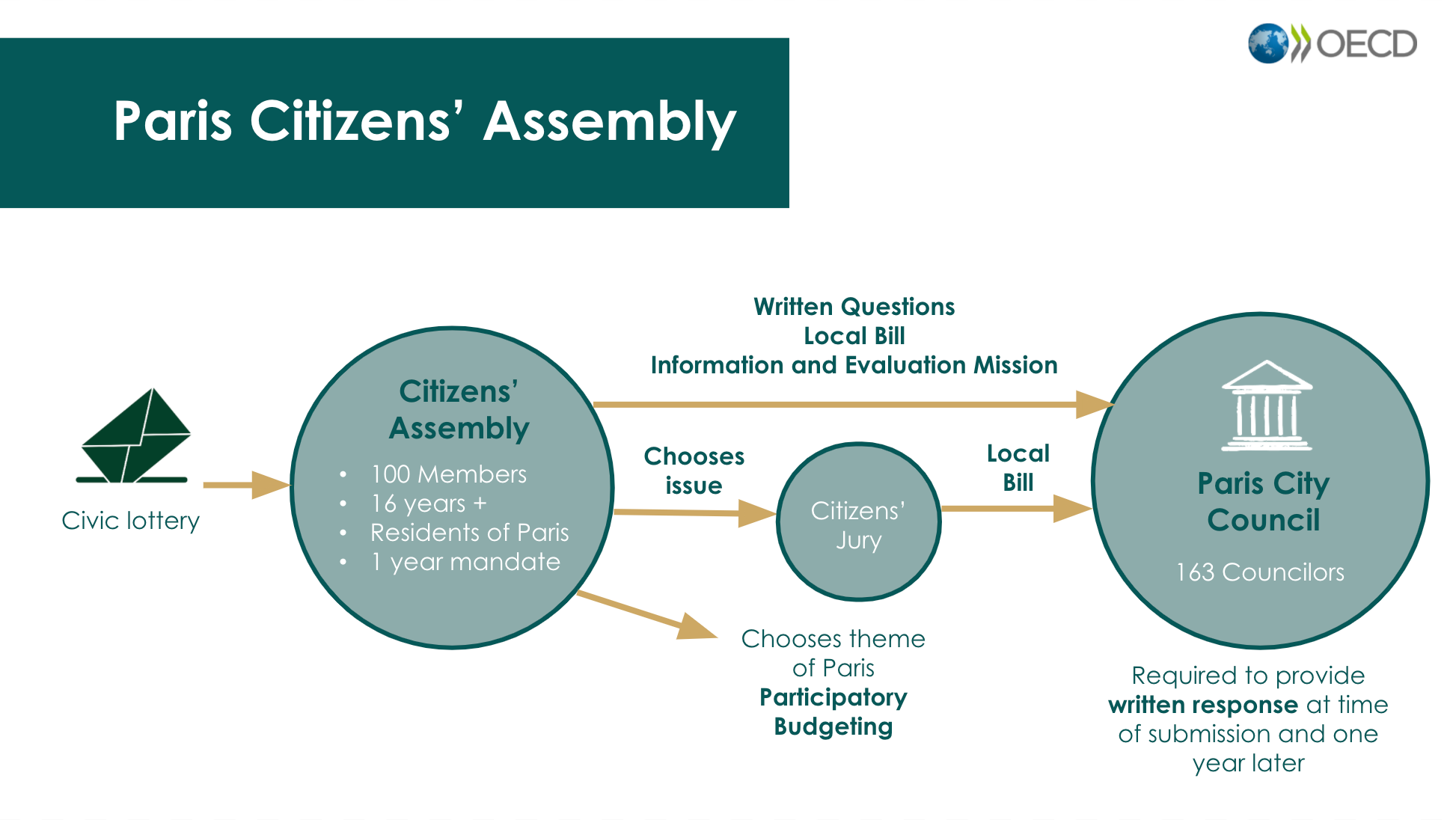 One of the first regions to institutionalise the use of democratic lotteries, in 2019, was the Ostbelgien Citizens' Council. This year we've seen new standing citizens' councils and assemblies in Newham in London and now in Paris and alongside these is the growing campaign for a House of Citizens to form a second chamber in Scotland.

From our experience in Newham, Ostbelgien and Scotland, below we take a look at the different aspects that are working well, and how to ensure that institutionalised assemblies, and in particular the selection of participants, run smoothly. 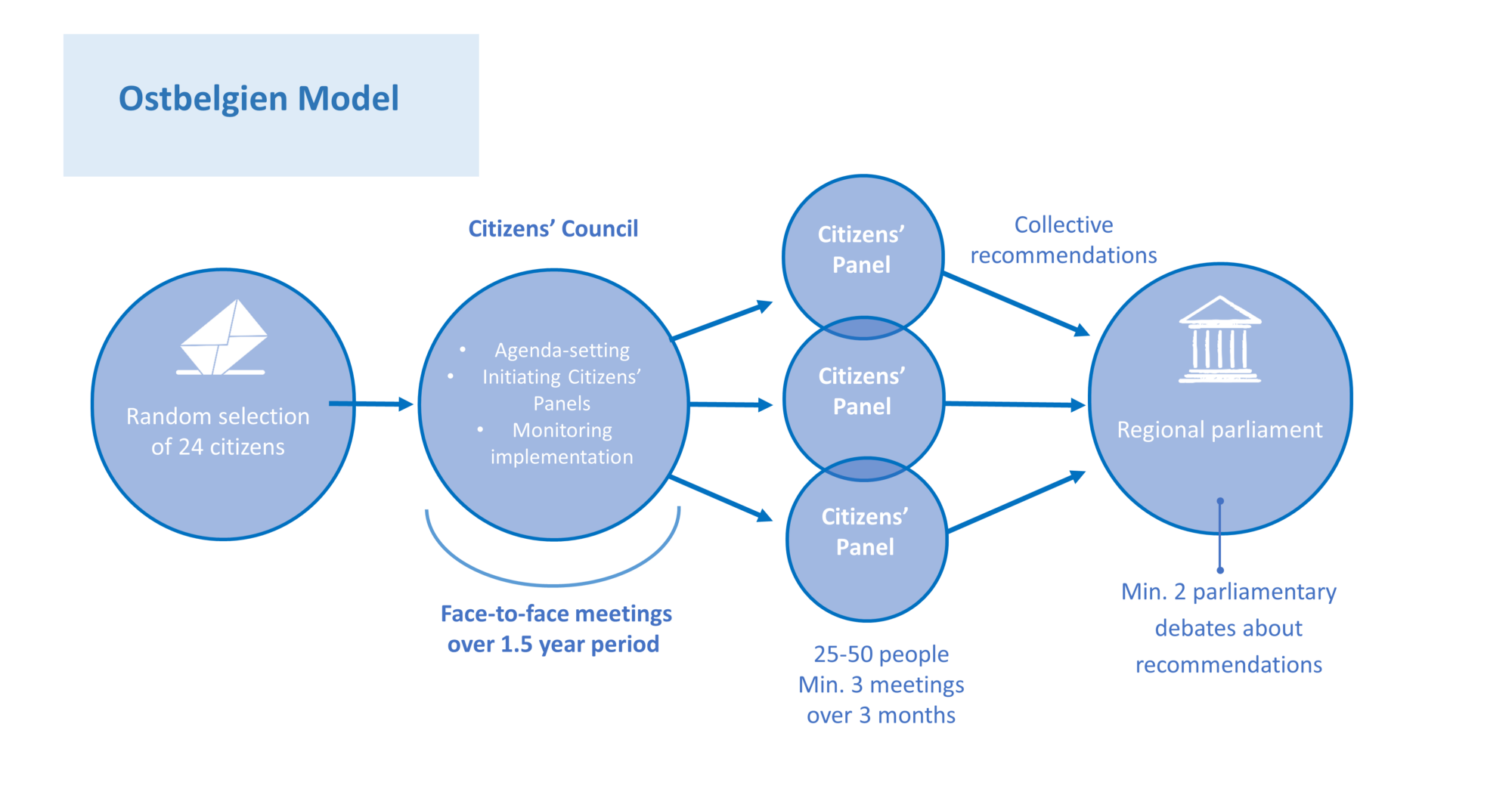 This process - of allowing one randomly selected body to define the agenda for the decision-making body - is the best way of ensuring the legitimacy of the decisions coming out of the citizens' assembly. By removing agenda-setting from either vested interests or politicians, the process allows for matters of genuine public concern to be raised. In practice it means that things in the politically 'too difficult' basket get onto the agenda, and that political grandstanding has little effect on the process.

If it's not possible to hold an agenda-setting assembly, an alternative is to hold an open call for topics, which could then be voted on. This method reduces the deliberation in the agenda setting, with an impact on the quality of the results, but would cost less.

Before the first assembly

We strongly suggest that if you're thinking about setting up a standing body, you start talking to those who have been involved in other assemblies as soon as possible! Organisations that run deliberative processes and recruitment specialists like ourselves can advise you based on what has worked, and what hasn't, elsewhere. 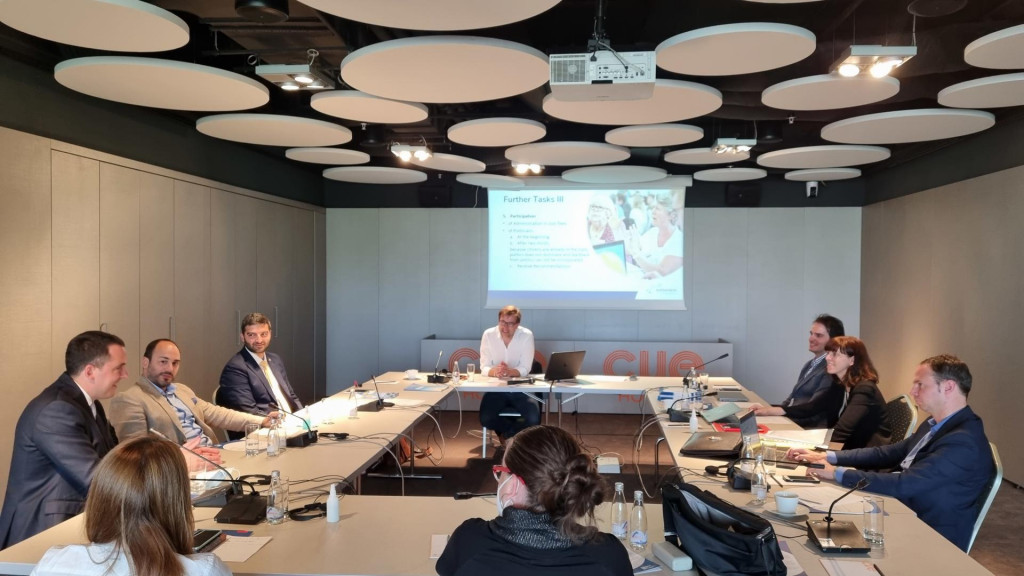 One of the key things we've learned is that plenty of time needs to be given to setting up the first assembly: time for recruitment, time for selecting an independent delivery organisation, and time to create a big splash! As the earliest modern citizens' assemblies in Canada showed, the better the public understand and support the process, the better the likelihood of public support for the recommendations the assembly makes.

We suggest that public participation and observation is built into the assemblies. While the deliberations themselves should be kept behind closed doors to allow the genuine exchange of views, the information sessions, and the opening and closing addresses, should all be made public, ideally with videos uploaded so anyone can watch them, and comment.

Build learning into the process, before the next round of deliberations starts.

It's also good to think about how previous participants are going to use their new expertise: will the council (or similar) support them to continue participating or to act as ambassadors for either the results or the process itself? And will they be paid for this ongoing role?

How will the outcomes and the response to those outcomes be structured? One of the main risks attached to citizens' assemblies is that the council or commissioning body doesn't implement the recommendations, which can undermine the legitimacy of both the citizens' assembly and the democratically elected decision-makers.

How will the next assembly be constituted? Should you keep a percentage of people from the first assembly to sit in the second? The aim of this would be to maintain some institutional knowledge between assemblies, with the participants who continue chosen by lottery; and maybe limit the number of consecutive times any individual can participate in a process, so that there isn't a new type of institutionalisation of personnel.

We also suggest regular updating of the pool of participants, at least once every couple of years, and updating the demographics at the same time, so that the assembly continues to reflect the broader community.