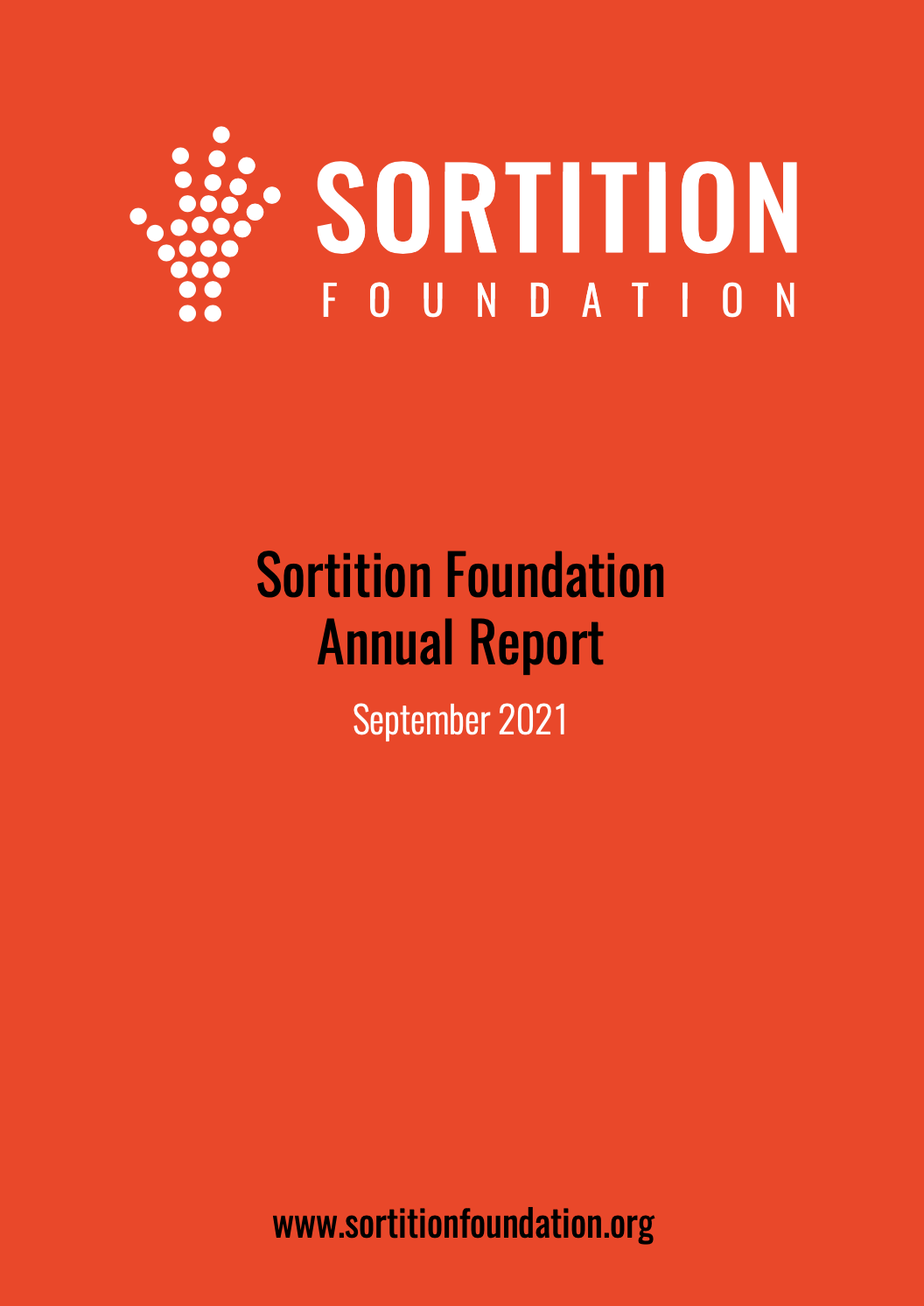 In 2019-20 we recruited participants for 43 citizens' assemblies and the like. In 2021 we’ve supported 42 such events, and are working on around nine(!) more at the time of writing this - so basically we’ve helped run as many citizens' assemblies this year as we have in the previous two years combined.

In doing so we sent out one third of a million letters, 9,000 people responded to them, and we selected over 1,600 people to take part in deliberative processes.

Our revenue was over a quarter of a million pounds, most of which is made by supporting these assemblies and, as we are a not-for-profit company, our surplus pays for much of our campaigning activities in the UK and now Hungary as well. We’re also turning a small but consistent surplus on top of that so we can continue to grow and develop over the long-term.

In terms of staff: Brett Hennig has largely stepped back from our sortition services to focus on other work in the organisation, we gained a mathematician, Nick Gill, and are supporting Bea Sándor in Hungary and Will Stringer in our Scotland campaigns.

While doing all this, we also managed to reorganise ourselves in a clearer structure with formal employee control of the organisation (more below).

As well as lots more events in our familiar backyards of Australia, England, Scotland and Wales, we also worked in Jersey this year where legislation to start to change the law on assisted dying has just been passed as a result; we trained teams in Spain and Switzerland to use our ever-improving software, and supported an event in Brazil. We’re talking to folks in Malaysia about setting up processes there, and we’ve just finished working on the second round of the first institutionalised process in the UK in Newham, London, and it sounds like we may have more of these starting in Australia and the UK.

We worked on the groundbreaking Global Assembly on Climate Change, which fed into the COP26 summit. As a result, UNEP is talking to us about future global assemblies feeding into their processes.

An academic paper proving that the software we use is “the fairest possible” was published in Nature!

We’ve also started a conversation in the UK on diversity and inclusion in the democracy sector’s processes and our partners and clients continue to really like us!

Changing our internal governance to be more democratic

We warmly thank those members who attended our Annual General Meeting on Thursday 9th September. The minutes of the AGM are included in our 2021 Annual Report, which includes a summary of our activity for the year.

We were very pleased that, after a year of discussions and a thorough review of our Articles of Association, the proposal to replace them with new articles was unanimously accepted. We came to the belief that the most democratic structure for a not-for-profit company with a social mission was a workers' cooperative, and although the new articles are not exactly the standard articles of a workers' cooperative we borrowed heavily from that model. In fact, the only important difference is that staff pay will be set by a group of unpaid independent directors.

This empowers the staff within the Sortition Foundation - the people delivering our sortition services and running our campaigns to institutionalise sortition - to make the decisions that they think best in an internally democratic manner, which to us seems in line with our values and principles. It promises to be an exciting and challenging year ahead for us all as we take this next step in the history of the Sortition Foundation.

For you, our supporters, we will now focus on developing opportunities for learning more about sortition and engaging in public campaigns, which is what you told us you wanted. Your support helps us to campaign for a real democracy, and if you know others who would like to get involved, please share our supporters' page with them.

Thank you again for your help and continued support!